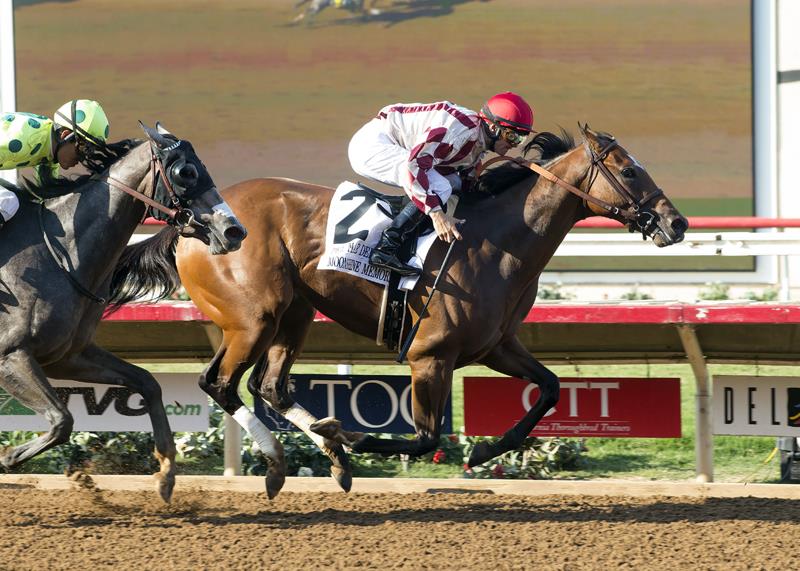 The winner is owned by Bridlewood Farm, Mrs. John Magnier, Derrick Smith and Michael Tabor. She has earned $216,000 in her two wins.

Despite the short rest between starts, the daughter of Malibu Moon was keen right out of the gate, assuming command in just a few strides. She got some early pressure from Gabrielleizabeth, who began to fade after three furlongs. Moonshine Memories was up two lengths at the top of the stretch, and held that lead until very late, when Piedi Bianchi made a late run, but could get no closer than a half-length.

“We were actually looking for any small excuse not to run her back [in two weeks],” winning trainer Simon Callaghan said. “This filly just did everything you’d want from a horse in between [starts]. She showed in the paddock, her disposition and how calm she was, is something you can’t instill in them, it’s within them. [During the race], I liked the way she was traveling within herself, but then you look at the fractions and you get a little worried. She just kept running potential rivals off and she was all heart at the end.”

Moonshine Memories, now likely bound for the Breeders’ Cup Juvenile Fillies (G1) in two months at Del Mar, was a $650,000 purchase by her owner’s at last year’s Fasig-Tipton Saratoga Yearling sale. The bay filly is out of Unenchantedevening, who is a half-sister to Horse of the Year Favorite Trick.