Pair of six-figure Chitu juveniles Wednesday at OBS 2yo sale 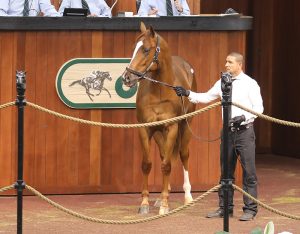 Hip No. 555, who had breezed a rapid 10 seconds flat at the Under Tack Show, brought the top price of the day for his sire from winning bidder Donato Lanni, agent. The bay colt’s dam is a stakes winner and comes from a family of no less than five stakes horses.

Chitu, whose first starter, the filly Silver Tunes, will make her debut on Thursday in Gulfstream Park’s third race, has two lots remaining in the OBS auction. After Wednesday’s results, Chitu’s 2-year-olds have averaged more than 21 times his stud fee of $4,500.