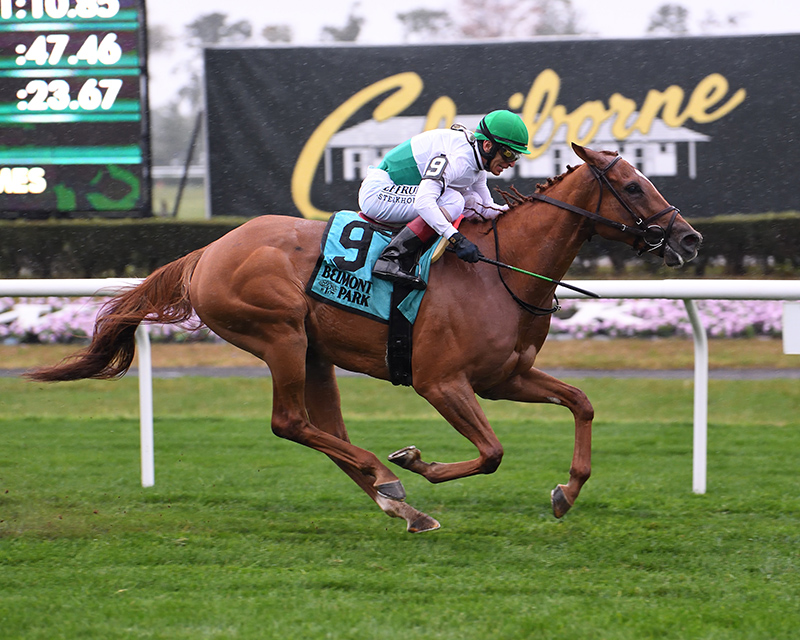 Trainer Jonathan Thomas, who took over training Xenobia when she shipped to the U. S. earlier this year, got his first stakes win with the 5-year-old in the $200,000 Athenia S. (G3) on the turf at Belmont Park.

A Group 3 winner in her native country last year, Xenobia contested two allowance races at Belmont this year prior to Sunday’s win. Purchased by George Strawbridge’s Augustin Stable this spring, the daughter of Falco is now 5-3-3 in 13 starts and has earned $246,606.

On the outside in the field of eight, Xenobia was a bit slow into stride but quickly began to gain momentum and went past Candy Store (IRE) to grab the lead after a quarter-mile. Jockey John Velazquez let her open up by some six lengths on the final turn, then set her down for the drive. Sweet Bye and Bye cut into the deficit late but never seriously threatened, with Xenobia winning by 1 1/2-lengths in 1:41.21 for the 1 1/16-miles on the firm turf.

“My plan was to stalk horses, but I couldn’t get her to relax. Jonathan had said, ‘Don’t fight her,’ so I let her go. Then it was all her,” Velazquez said. “It was my fault because I asked her to break and once I got to them, that was it, but when she got to the lead, she relaxed. I just had to keep her mind on running. She can run.”

Thomas was much more forgiving of Velazquez’s ride.

“I loved the assertiveness. I thought Johnny’s ride into the first turn was Hall of Fame (worthy). She’s a big, striding filly when you get her into a high cruising speed, and she was fortunate enough to see out the trip,” Thomas said. “Mr. Strawbridge was great. We had an allowance race that ran earlier today as an option, but he decided to roll the dice.”